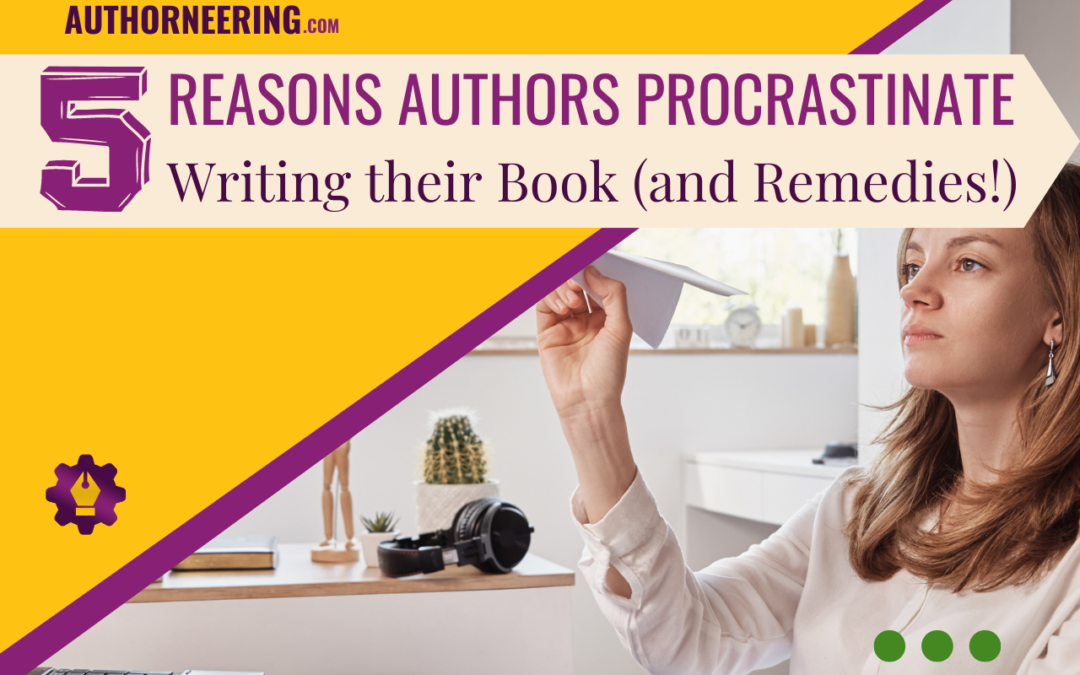 Do you have a book idea that’s been bouncing around in your head for weeks, months, or even years but you just haven’t found the time to start writing it? Perhaps you’ve started, but then got stuck and never got back to the project. Or maybe it just seems like “life” is getting in the way of your writing time. You’re not alone. In fact, many authors (published or otherwise) procrastinate when it comes to writing their books. I know I’ve done it!

But why does this happen? And more importantly, how can you overcome these challenges and finally complete your book? In this post, I’ll explore five common reasons why we procrastinate on our books and offer some remedies to help get you over the hump and finish your book. Read on and see if you can’t find the cure to your procrastination.

Procrastination can be a mild form of Writer’s Block, and therefore can have a variety of causes. In this post I’m going to discuss the five most common reasons authors put off writing their books: 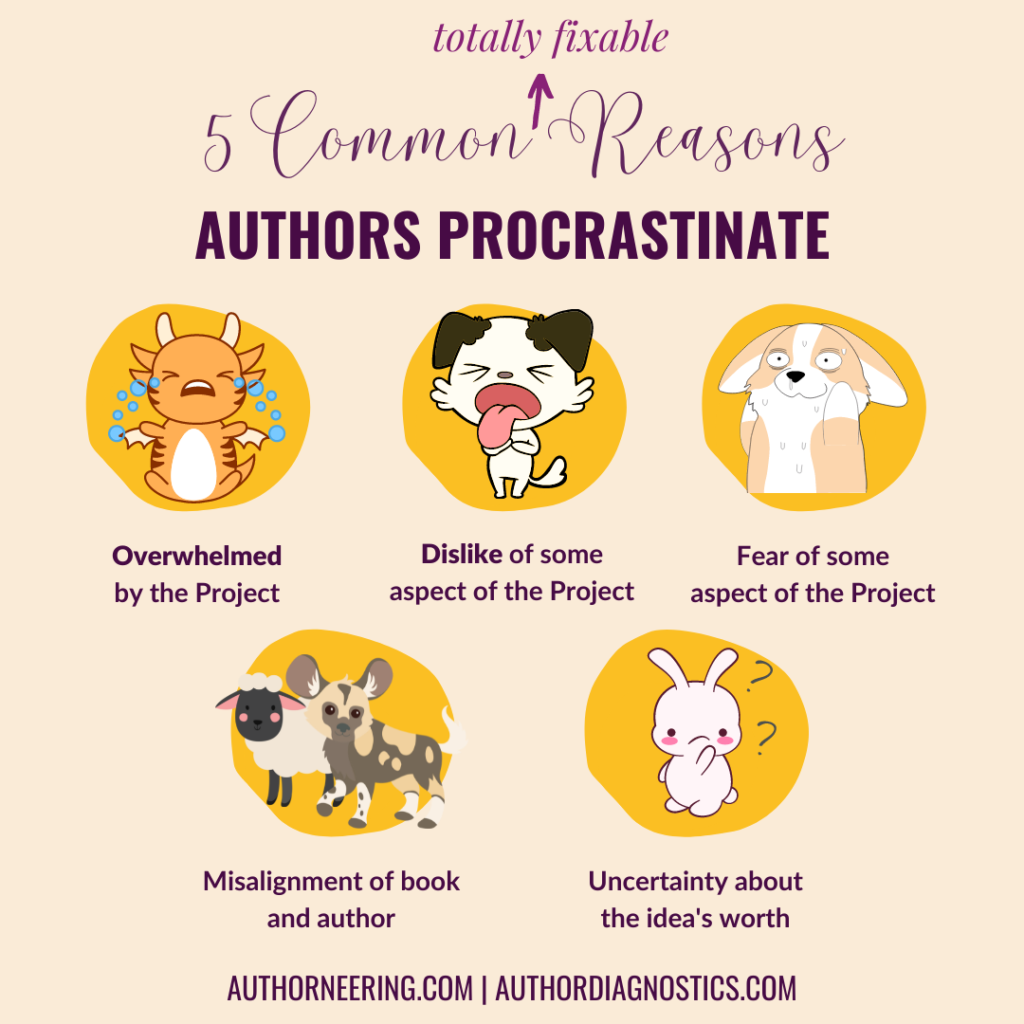 Sometimes, when a task seems so big and overwhelming, you can feel so daunted that it is easier to just not start. This is often the perception newer authors have about the process of writing a book. Many believe the project is so big or has so many moving parts, they don’t know where to start. 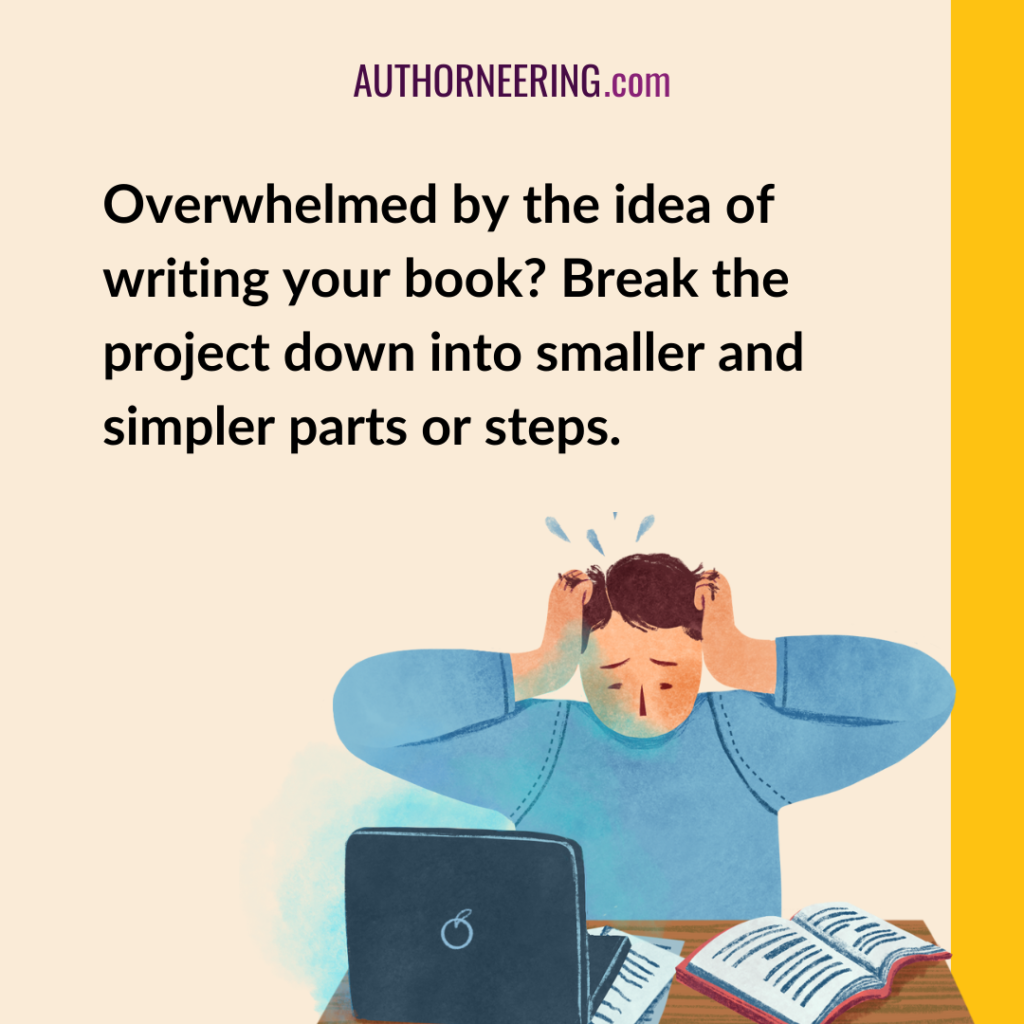 One way to overcome this challenge is to break the book up into smaller, easier-to-handle tasks—and that includes chapters. Give each mini task, such as a paragraph, subsection, word count, or page, a deadline, so that you can feel accomplished.

For a typical book, there are 333 words to a page. And the typical word count for nonfiction books is as follows:

Be realistic about how quickly your chosen mini-tasks can be completed. If you are still getting behind, you can always re-evaluate the time you’ve allotted and give yourself more time.

For this cure, it is very helpful to have a working outline. There are plenty of articles online and books about how to create a book outline, but if you would like my help so that you get your outline done in just four short sessions, check out my Book Kickstarter V.I.P. Intensive program.

Dislike of Some Aspect of Writing the Book

There are two potential dislikes at work here: A dislike of writing in general or a dislike of some part of the book. The former is usually pretty obvious, but the latter can be unconscious. Some budding authors really don’t like writing. Others don’t like some part of the content of the book. And most authors procrastinate until another day writing tasks they don’t enjoy.

For example, I don’t like cleaning, so that is a task I often put off (until company is coming, of course). However, when I was writing Public Speaking Super Powers, there was one chapter that I found, well, boring, and so kept putting off writing it. 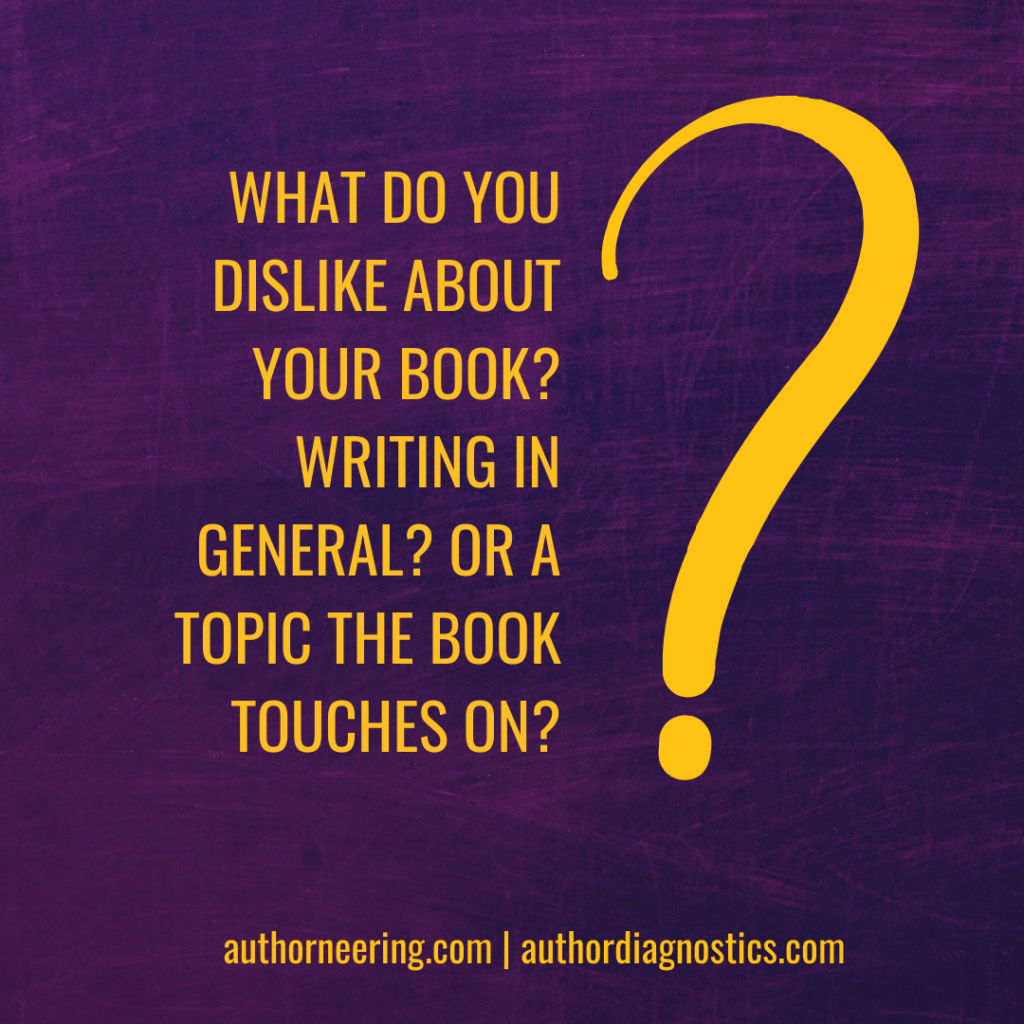 If you don’t like writing, a good way to overcome this challenge is to delegate the task to someone who not only loves to write but probably does it better than you because of their fondness for the craft. There are plenty of ghostwriters who would be willing to put pen to paper for you. In fact, I take on the occasional ghostwriting client. If that interests you, schedule an Authorneer’s Code Analysis.

If you are avoiding a specific part of your book because it makes you uncomfortable, bored, or whatever emotion of dislike is causing you to put it on pause, then you have a couple of options:

For example, when writing 57 Secrets for Branding Yourself Online, I finally decided not to include some content because not only did I not like the topic, but I found it didn’t really mesh well with the rest of the book. Problem solved! However, when I was bumping up against that “boring” chapter in Public Speaking Super Powers, I finally had to bite the bullet and do what I needed to do to make it more interesting not only for me but for my readers.

Fear of Some Aspect of Writing the Book 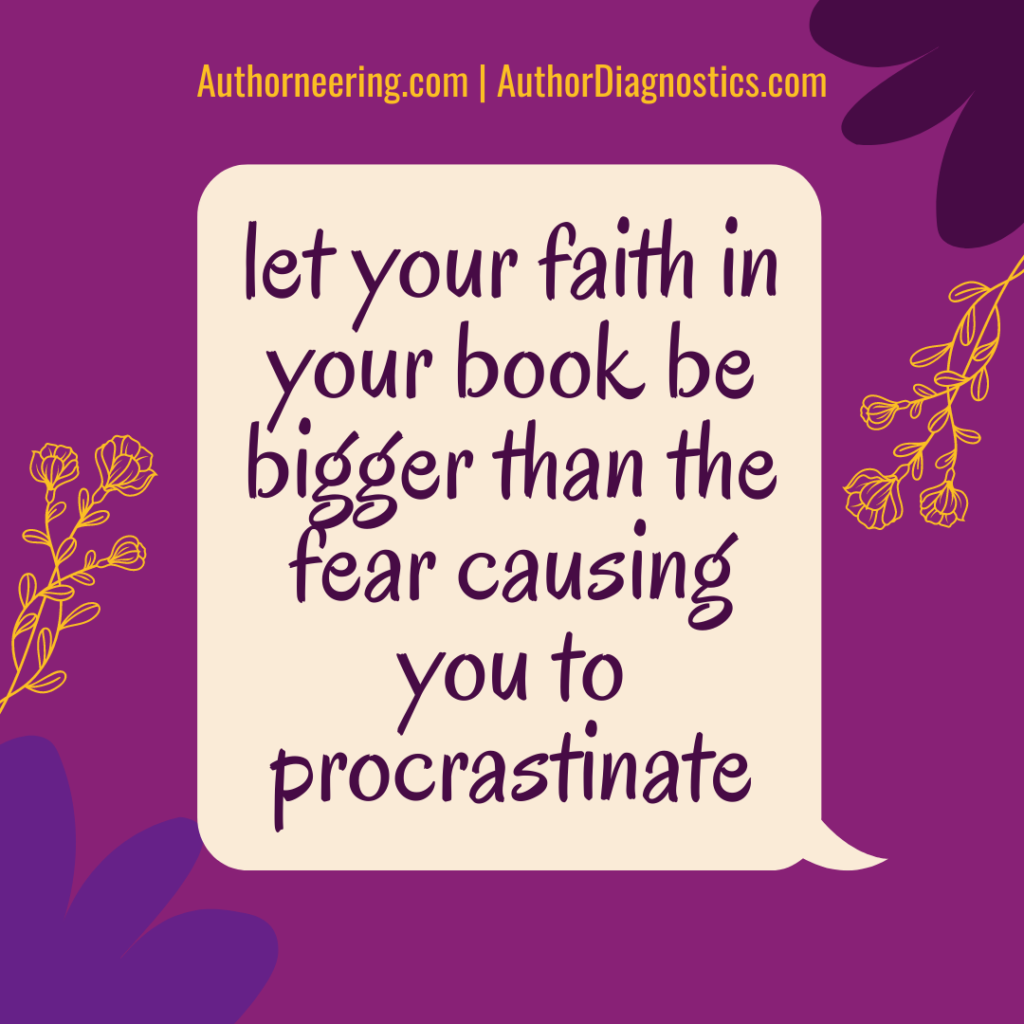 There are two kinds of fear: Good (protective) and not-so-good (keeps you stuck). For example, a fear of touching a hot pot’s handle is a good, protective fear. It protects us from getting our hands burned.

Also, sometimes the cause of this fear is veiled. This is particularly common when writing an autobiography or memoir because you may be digging up unpleasant memories.

More often than not, our fear is trying to be protective, even when it is misdirected. So, one way to address this fear is to understand what it is trying to protect you from. And, when you identify that it is protecting you from something that is not dangerous (like stepping outside your comfort zone), then treat it as you would a protective dog: Train it (and sometimes ignore it) when it tries to protect you from the wrong things.

Of course, there is a lot to accomplishing that goal, but discussing the steps and nuances is outside the scope of this post. I recommend reading a good book on the subject. You can find many on Amazon

Misalignment of Book and Author

Sometimes, you get an idea for a book you shouldn’t be writing. Perhaps you aren’t knowledgeable enough to write the book, other times it doesn’t help you reach your goals. Yet other times, it may be, in some way, against your core beliefs or values. If the previous reasons aren’t behind your procrastination, this one very likely is.

Take a look at your book’s topic and ask yourself how you feel about it. Does the book idea make you feel negative emotions such as anger, discomfort, or fear? If so, you really need to take a look at why you feel the book needs to be written and written by you. 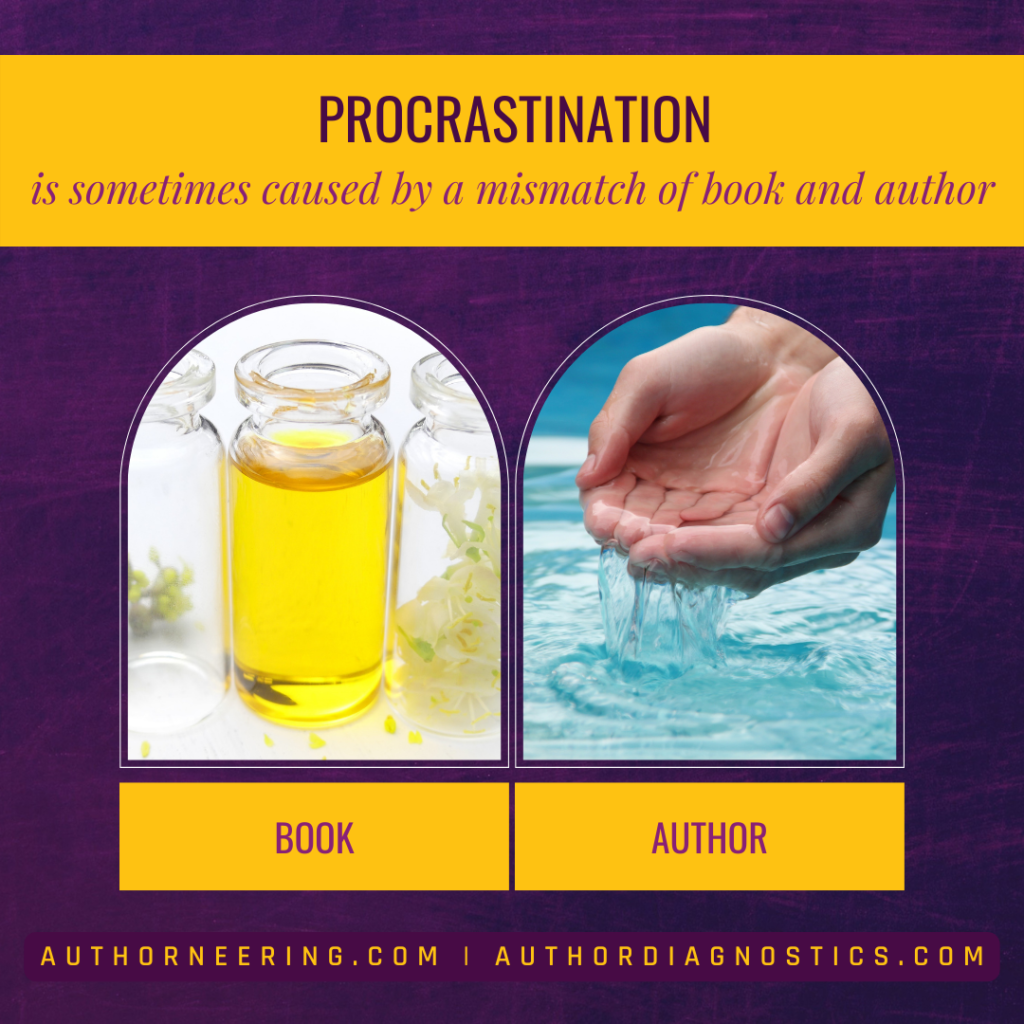 For example, I met with a coach who suggested I not write Public Speaking Super Powers, but instead write a book about the superpowers of 7-figure women entrepreneurs. Being an action-taker, I did start looking for such women and even interviewed one for the book. It took all I had to take those actions, and worse, the recording of the interview was lost. When I really looked at the book idea, I realized that although it was a great idea, it was not a good fit for me. And so, I let that project go and have never returned to the idea.

Uncertainty About the Book Idea’s Worth

One cause of author procrastination, especially with first-time authors, is being uncertain whether their idea is any good. This can come from a lack of confidence in your skills as a writer or your expertise. Of all the causes of procrastination, this one is the easiest to fix because there is a system you can use to validate your book idea! 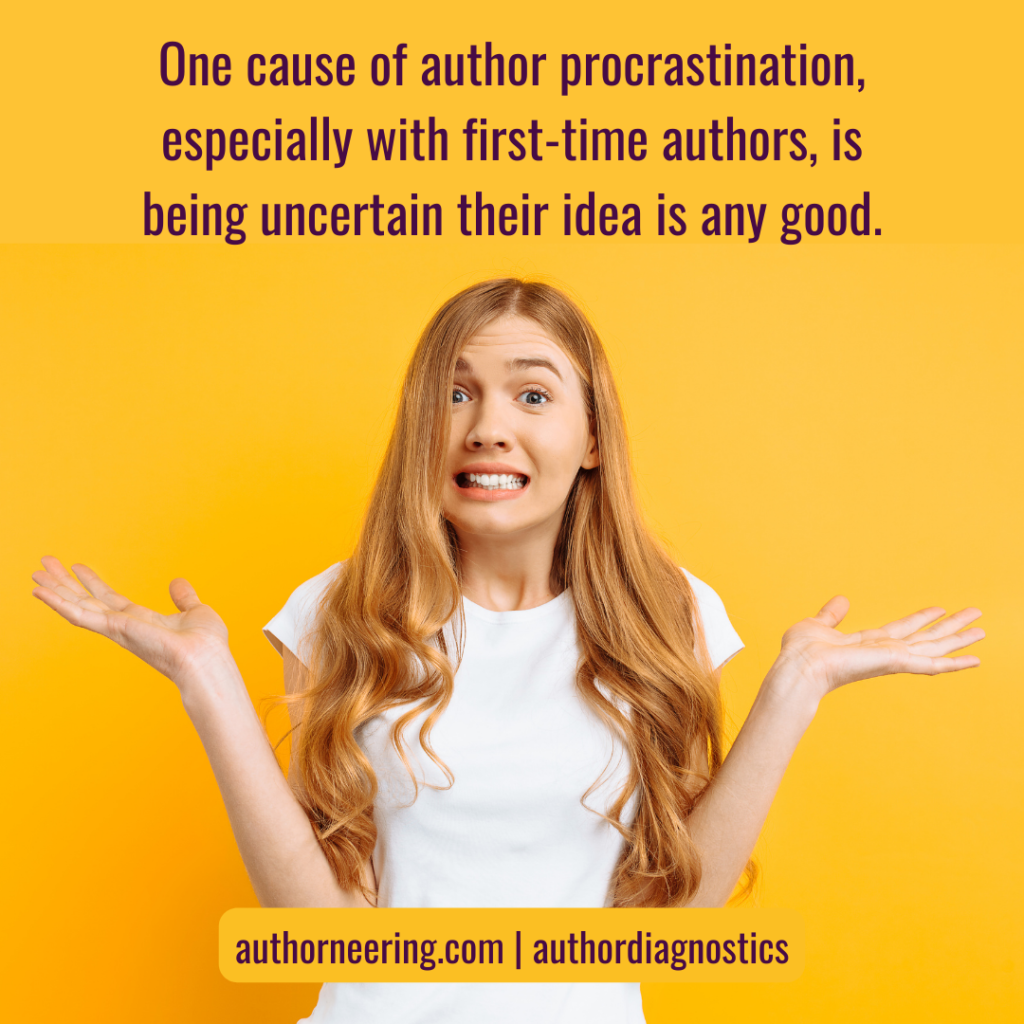 In my post, How To Evaluate Your Book Idea, I walk you through the questions you need to ask about your book idea to make sure that it is sound. Even better, I’m now offering a Book Idea Diagnostic session in which I use a proprietary diagnostic software I’ve developed to evaluate your book idea in four separate quadrants. By the end of the session, you will not only know how good your idea is but also how to improve it.

All of these are completely normal concerns and doubts that writers face at one time or another. It can feel daunting to take on such a large project, but I want to assure you that you can do it. And the good news is that not only are there solutions to all of these anxieties, but you also don’t have to go through it alone. I want to help make the process of writing a book easier for you. That’s why I offer the variety of consultation services, mentioned in this post, to help writers just like you move an idea from inside their head to between the pages of a published book. Before you give up on your dream of becoming an author, consider scheduling a call with me.

Are you putting off writing your book because you are afraid your idea isn’t good enough? The Book Idea Diagnostic dives into your book idea to uncover the potential it already has and identifies specific areas for growth and improvement.

Manage Cookie Consent
Authorneering.com uses technologies like cookies to store and/or access device information. This is done to improve browsing experience and to show personalized ads. Consenting to these technologies will allow Authorneering.com to process data such as browsing behavior or unique IDs on this site. Not consenting or withdrawing consent, may adversely affect certain features and functions.
Manage options Manage services Manage vendors Read more about these purposes
View preferences
{title} {title} {title}